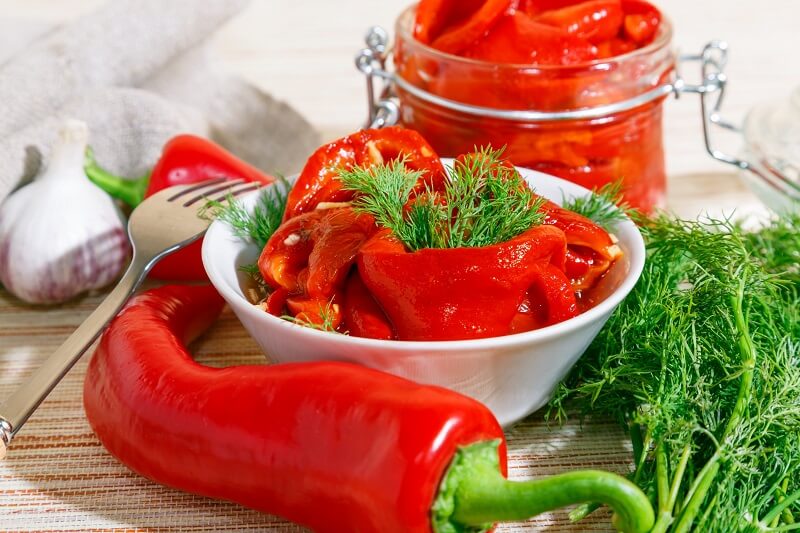 
If you love roasted pepper salad served alongside a delicious steak or side dish, you can enjoy it in the cold season too. Here’s a recipe for canned roasted peppers, preserved for winter.

Roasted pepper salad is one of the delicacies you can indulge in from summer to late autumn. You can make it from all types of peppers: bell peppers, long pointy or pimento peppers. It’s perfect served with any type of steak or roast poultry. But if you’re not a fan of meat dishes, you can enjoy it with a side of potatoes, rice or even pasta.

And because peppers aren’t as affordable in winter as they are in summer, you can enjoy them all around the year by preserving them in jars.

First wash the peppers well and dry them with paper towels. Place the peppers in an oven tray and bake at 200 degrees for 30-40 minutes. When the peppers are cooked on one side, turn them over and cook on all sides until the skin turns crispy.

If you have more time and a grill, you can roast the peppers on the grill. They’ll be tastier, but you need to watch closely, as they’ll cook faster and may burn if left on one side for too long. After the peppers are soft, sprinkle salt over them and cover with foil. Leave for 15-20 minutes to steam under the foil, as this way they will peel much faster.

Once the peppers have rested under foil, peel them, and place the clean flesh in a sieve over a bowl. Let them drain well and use their juice to marinate the peppers in the jar.

How to prepare brine for canned roasted peppers

Put a saucepan on the stove in which you add the above-mentioned liquid, vinegar, oil, salt, sugar and spices. Simmer the mixture of ingredients until the salt and sugar are dissolved. Stir to help them dissolve faster. Then remove the pot from the stove and let the brine cool slightly. In the meantime, sterilize the jars.

Fill the sterilized jars with the roasted peppers, alternately adding red and yellow peppers to the same jar for a more esthetic effect.

Pour the hot brine through a sieve over the peppers in the jars. Immediately seal the jars with the lids provided. Cover the jars with several blankets and leave them covered until they cool. Once cooled completely, you can label them with the date of preparation and transfer them to the pantry to enjoy a delicious roasted pepper salad with other dishes later.

The significance of the New Moon on 26 September

How to keep cut flowers fresh for a longer time

Autumn Equinox 2022. When will the astronomical autumn begin?