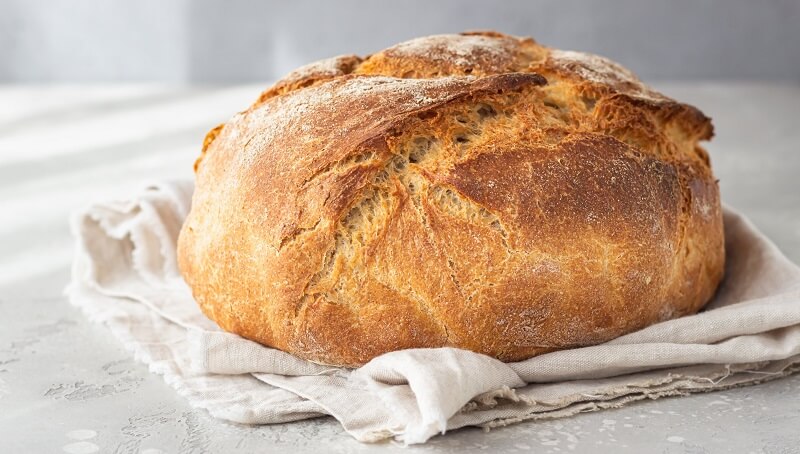 
There’s no comparison to fresh homemade bread baked at home. However, it’s also a fact that many people don’t dare to try their hands at bread baking, because there are so many little things that can go wrong and they are afraid to be left standing over a ruined batch of dough. But now we’ve put together five things that, if you stick to them, will guarantee you never fail at baking a loaf of bread again.

Many people have tried to bake their own bread – and found out that it’s a lot more complicated than they thought. Either the bread is too wet or too dry, too porous or too dense, too hard or too soft. Often it’s not so easy to figure out what we’ve done wrong,” blick.ch recently published.

Here are some of the most common mistakes that prevent successful baking.

Bread baking can all go wrong before you even start. When making the dough, it is very important to measure out the ingredients accurately. Especially with delicate things like yeast and baking powder, just a few grams can mean the difference between airy, light and hard bread dough.

It also helps if you know the ingredients a little better. For example, it’s worth paying attention to the flour you use. Different types of flour require different amounts of water. Otherwise, the water-to-flour ratio will be upset and the bread will turn into a flat cake or crumbly loaf.

Yeast is a tricky ingredient and it’s not just the quantity that can be wrong. Always make sure the yeast is as fresh as possible. Yeast that is too old will lose its effectiveness. To check that the yeast is still active, mix two teaspoons of yeast with ½ teaspoon of sugar and 125 milliliters of lukewarm water. If, after ten to fifteen minutes, small bubbles form on the surface of the water, the yeast is still active.

The yeast should not be placed directly on the salt. This can lead to an undesirable chemical reaction, which will adversely affect the bread. This doesn’t mean you have to separate them, just put the two ingredients in opposite ends of the bowl when you mix the ingredients.

If you do not knead the dough well enough, the protein molecules in the flour will not stick together and gluten will not form. This is a problem because gluten is essential in bread and acts as a skeleton that allows the bread to rise and keep its shape. However, it is also not a good idea to overwork the dough, as this can cause the protein molecules to break down.

If you’re not sure if you’ve kneaded the dough enough, take a piece of dough to the window. If you can “see through it” after pulling it apart carefully, that is, you can stretch the dough out very thin, you have kneaded it enough. Under-kneaded dough will tear when you try to pull it apart.

Overworked dough is difficult to salvage, and this is why you have to pay close attention to the dough’s consistency. If it starts to fall apart and become sticky, it could be a sign that you have over-kneaded the dough.

When kneading bread by hand, you need some flour to keep everything from sticking. You should be careful, however, and try not to use too much flour, as the flour will take the necessary moisture from the dough. It’s best to spread just a little flour on the kneading board and work on that.

4. The dough does not rise properly

You can also go wrong when rising the dough: if the temperature is too cold or too hot, the yeast will undergo a chemical reaction and can no longer work properly. Rising the dough at room temperature without a draught is always the most effective.

In addition, the dough should remain covered during rising. If too much air gets to the dough, a thin, rigid skin will form around it, which can hinder rising.

5. You do not cut slits into the dough

Cutting some slits into the dough before baking is very important for a nice bread. Yeast forms carbon dioxide in the bread, which is released during baking.

If you don’t cut the dough about a centimeter deep in several places, the carbon dioxide can’t escape, and the bread will crack.

Golden Sunday broth: it is the best with beef